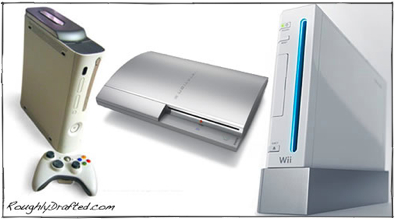 The Sony PlayStation 3 and Nintendo Wii both jumped into the game console ring to compete against Microsoft’s Xbox 360. Who is going to win?

Everyone’s watching to see how this battle plays out, because each company is pursuing a very different strategy. Sony and Microsoft are gunning for pure performance systems, while Nintendo is shooting at fun, playable games that rely more on its unique controllers than impressive graphics hardware.

The consoles’ prices follow the features and product strategy of each company:

Sony is setting up the PS3 as a PC alternative. Sony originally announced plans to ship the PS3 with Linux pre-installed, but currently user installation of “another operating system” is only a boot option. The PS3 is also the new HD core of Sony’s modern take on the stereo system, offering 5.1 Dolby Digital Surround and true 1080p high definition video playback from prerecorded Blu-ray movies.

Rather than positioning the Xbox 360 as a standalone PC alternative, Microsoft pairs it with its plans for Windows Media Center, allowing the 360 to be used as a media extender to stream music and movies from a central Media Center PC.

Microsoft has plans to offer HD movie playback both with an optional HD-DVD player in an external box, and over the web through its online Xbox Live video store.

However, the Xbox 360’s optional, external HD-DVD player is $200, pushing the 360 up to the same price as the PS3. Further, the $300 core Xbox 360 systems can’t use Microsoft’s online video store because they don’t have the required hard drive to save downloaded movies.

Nintendo Wii
The Wii is the least expensive of the three at $250, and includes both Bluetooth for wireless controllers and a DVD drive, but will not be able to play DVD movies. It also lacks a hard drive. Instead, the Wii focuses on physically involving games using the wireless Wii Remote paired with the accessory Nunchuk controller.

The Wii Remote uses accelerometers to sense how players swing, point, and tilt the controller, encouraging game titles to incorporate activity. The Wii will also wirelessly connect to Nintendo’s DS portable game system, using its microphone and touchscreen as inputs for Wii games. While the Wii has no movie store, Nintendo has an online store that sells classic games from the Nintendo 64 and other previous game consoles.

The Last Generation
So which console is going to assume the lead, or will there be a tie? A half decade ago, many analysts projected a close race between the Sony’s PlayStation 2, Microsoft’s original Xbox, and Nintendo’s GameCube, but their prediction turned out to be wrong: Sony simply blew away the competition with its PS2.

This time around however, a number of factors have changed. For example, while Nintendo’s 2001 GameCube was also the cheapest console, its sales were hurt by a game lineup that mainly targeted the youth market rather than teens and adults, something Nintendo has attempted to address.

Here’s a quick look at the lessons learned in the last generation of consoles, how Microsoft got involved in console gaming, what resulted then, and what factors will determine how things work out this time. Is there such a thing as a non-breaking hyphen to prevent words like’e-mail’ and ‘e-commerce’ from breaking in two pieces at the end of a line?

Solution
I haven’t used it much, but placing the whole word between <nobr></nobr> tags should work……. It worked for me!

As this page of the Apex docs indicates, you can’t just make a User trigger that updates a Contact or an Account, because it’s forbidden to modify those “non-setup” objects from a “setup” object like User.

Fortunately there is a simple solution: the @future annotation.  The @future annotation allows you to create Apex that runs asynchronously at some point in the future (in my tests I’ve found that it runs immediately, or at least very soon after the trigger executes).  Methods that use @future are subject to different limits than normal trigger operations because @future methods don’t hold up the trigger (and therefore the entire user experience) while they’re working.  Therefore @future methods are often used to perform long-running web service callouts from triggers asynchronously.  However, they can also be handy for a case like ours, where we want to update an object that we’re not normally eligible to update.

Calling a method that has been marked as @future is just like calling any other static method.  Here’s my trigger, short and sweet:

Let’s see how that works.  In the example given here, I just update a couple of fields from the user record: the name, the email address, and the title.

Scenario :
We are building a Visualforce page for creating a case. Now there are fields in case which are read only for all profiles except System Adminstrator. I need the user to enter the value for this field and so I created my page with a controller and not a standard controller. Also in my controller we have added the modifier as without sharing.

Now when we log in through another user, we still see the field as read only on the page. However from the controller we are able to insert value or update the field. It seems to me that the page is running in User mode following the user profile permissions and field level security while the controller is running in Sytem mode. Is this the intended behaviour or are we missing something

Following are few of the possible solutions….

It is an intented behaviour, If the fields rendered on the page is strongly binded (i.e Value = {!ObjectName.Fieldname}).
Why not create input/HTML fields and bind them using getter setter method (i.e you take input in a normal text field and bind it to the actual field in the controller). As these input Html fields are not binded to an object these fields will be editable regardless of profiles.

Make the fields read only at the page layout level and not at the profile level.

September 4, 2009 / Chirag Mehta / 0 Comments
To help land in a big ad account, notorious player Ben (Dude Matthew McConaughey) makes a wager with his co-workers that he can get a woman to fall in love with him within 10 days. But he bets on the wrong girl — women’s composure magazine writer Andie (Cute Kate hudson).
It turns out she’s writing an article on how to dump a guy in 10 days — and is set on seeing her story through to completion.

To help land in a big ad account, notorious player Ben (Dude Matthew McConaughey) makes a wager with his co-workers that he can get a woman to fall in love with him within 10 days. But he bets on the wrong girl — women’s composure magazine writer Andie (Cute Kate hudson).

It turns out she’s writing an article on how to dump a guy in 10 days — and is set on seeing her story through to completion.

It’s one time watch movie. It says loudly to guys that girls can knock anyone down in just 10 days. At the same time it also says that girls guys can knock you down anytime … lol …

I look through the documentation and didn’t see a system method that converts a date time field to a date. There is one for formula fields but is there one for Apex?

Solution : Just create a date newInstance() and pass in just the year,month,day from the dateTime object.