Google in an email to all developers states following …

In order to continue to improve our products and deliver more sophisticated features and performance, we are harnessing some of the latest improvements in web browser technology. This includes faster JavaScript processing and new standards like HTML5. As a result, over the course of 2010, we will be phasing out support for Microsoft Internet Explorer 6.0 as well as other older browsers that are not supported by their own manufacturers.

We plan to begin phasing out support of these older browsers on the Google Docs suite and the Google Sites editor on March 1, 2010. After that point, certain functionality within these applications may have higher latency and may not work correctly in these older browsers. Later in 2010, we will start to phase out support for these browsers for Google Mail and Google Calendar.

Google’s much anticipated Nexus One was finally unveiled at a press conference in Mountain View, California on January 5. It had already been distributed to Google employees in December, before its launch.

Made by HTC, Google has co-branded the phone. Google is retailing this phone in a way that it knows best, on the web. Available through www.google.com/phone, the phone is available for $529 as an unlocked version and $179 with two year contract with T-mobile (with a $79.99 monthly data plan) in the United States. It is also available for delivery in UK, Singapore and Hong Kong. So, yes, you cannot buy it in India yet, nor get it shipped here.

The looks of the phone are pretty similar to the iPhone but have a few more buttons that then Apple device. The bottom of the screen houses four touch sensitive buttons for Back, Home, Menu and Search unlike the iPhone that has just the one button to go back to the home screen. Below the buttons is a tri-color illuminated trackball. The color of the trackball changes depending on the kind of notification being received on the phone.

Many things are designed to make our lives easier, but sometimes they seem to make them more complicated. If everything worked like Google Mail, life would be much simpler!

Watch the videos at http://google.co.uk/googlemailvideos

Google Maps Navigation (Beta) is launched . It is an internet-connected GPS navigation system that provides turn-by-turn voice guidance as a free feature of Google Maps on  Android 2.0 phones.

What is Google Wave?

How a wave is structured?
How it works?
Also it details on Robots, Gadgets, Embedded Waves, Wavelets, Blips, threaded conversation model ….

So What Exactly Is Google Wave? 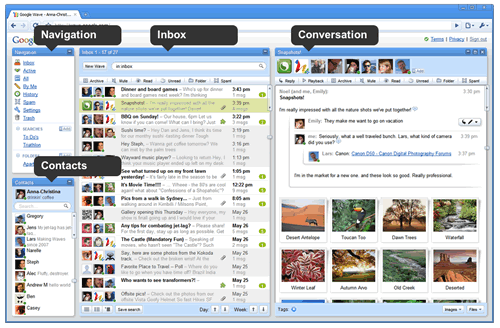 A general overview of how a wave is structured. Waves contain wavelets, which are containers for blips (messages) added by participants. Extensions, in the form of robots and gadgets augment the conversation between participants in a wave by adding different types of features and functionality to a conversation. 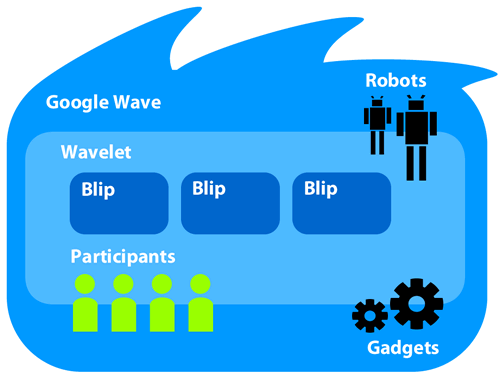 The threaded conversation model includes one or more threads based on replies to an initial message or replies to other replies. 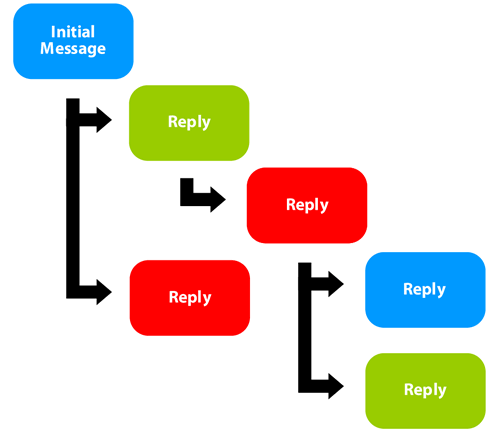 The most anticipated Google wave is live in limited mode. Currently it is in invitation mode, where in you need to request for an invitation to Google and they will revert back with limited version of Google Wave.

Wave is a new step towards Collobaration …

I am receiving error that Google’s mail service, Gmail, is down when I try to access GMail. CenterNetworks International Headquarters shows that it is unreachable. Google’s Apps Status Dashboard shows an outage for Gmail although they state it’s for a “small subset of users”.

The following message is displayed on some loads:

Server Error
The server encountered a temporary error and could not complete your request. Please try again in 30 seconds.

I am a big fan of using Gmail for all of my email needs. However, there is one thing that Gmail is missing that I find essential. How do you send an email at a specific time in the future?

For e.g, save an email(with future date defined) in OUTBOX to wish birthday of your loved ones. It automatically gets delivered on the date you want it to be sent on. No hassles, no crying or no need to make any excuses to your loves ones on missing to wish them birthday or anniversary or etc …

Anyone can request features to Google on GMail @ http://mail.google.com/support/bin/request.py?contact_type=suggest

So go ahead and request or suggest features you would like to see in Google’s GMAIL.